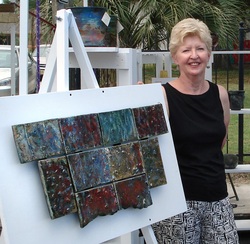 I have been working with clay since 1998 and have been a full time potter since my retirement as a registered nurse in April, 2010. I believe that I was first attracted to clay because it is diametrically opposed to the cleanliness and sterility of nursing, which was so much a part of my life. With clay, I was in the open air.  Dealing with mother earth, water and fire became my release.

My first studio, located in Waveland, MS., was lost to Hurricane Katrina in 2005. When rebuilding my home and studio in Kiln, MS., a potter friend loaned me a slab roller to create the fireplace tiles to be used in our house. Little did I know that this would open a whole new path of clay study .

I studied throwing with Regan Carney of Bay St. Louis MS. in 1998 and 1999. From 1999 to 2004 I was mentored in the art of raku firing by Joe Bernard of Lacombe, LA.  Aside from these two influences, I am mainly self-taught. My first love is for the raku firing process. I am now focused on creating artistic tiles for wall hangings and other projects.  I find no small irony in the fact that my studio is now located on Firetower Road in Kiln, Mississippi. 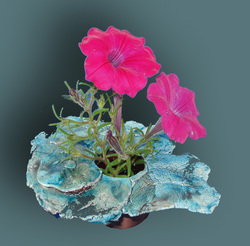 It is with certainty that I can say that my creative evolution gained momentum and took on a life of its own after Hurricane Katrina and again after my retirement as a registered nurse. The trauma to our Gulf Coast after Hurricane Katrina caused my creative juices to flow. I was releasing my deep sadness, frustration, and anger through my hands. After my retirement it was just the opposite: my sense of freedom, joy, and lack of stress kicked my creativity into another realm!

I spend as much time in nature as is possible. My studio is an outdoor studio covered with a roof only. Sometimes it is too hot. Sometimes it is too cold. Usually it is just right. I dress for the weather and let the weather influence my work. I feel that I am influenced by my love of nature in many ways. My penchant for abstract art is influenced by the colors and forms which surround me.

Pottery itself is a combination of physics (the throwing of the vessel), chemistry (the mixing of the various chemicals to form the glazes for the vessel), and art (the final product). My goal is to bring these three elements together with beauty and a bit of my own energy. My hope is that others can appreciate the pottery that has given me so much pleasure to create.